Cagwait Beach: Burying Our Feet in the Fine Sand of a Pretty, Humble Shore

Posted by Gian and Sheila on October 22, 2013 in Backpacking, Surigao del Sur

Filipinos are fond of associating an interesting person, place, or thing with another interesting person, place, or thing. For instance, the massive Tinuy-an Falls in Bislig is dubbed as “the Niagara Falls of the Philippines.” 2010 Lapu-Lapu City mayoralty candidate Efrain Pelaez promised to turn Mactan Island into a “little Singapore.” Sarah Geronimo was once labeled as the “Celine Dion of the Philippines.”

While researching for schedules, fares, accommodations, and other information about this Surigao trip, we came across a certain place called Cagwait Beach, also known as “the Boracay of Surigao.” Curiosity kicked in: what makes this beach similar to Boracay? Is it the clear, cool waters? Is it the vibrant nightlife? Is it the lively throngs of foreigners and local tourists?

After a bit of study, we realized that we actually have some time to spare before we call it a day and retire for the night in a resort in San Agustin. Thus, we decided to check out the Boracay of Surigao as a short side trip.

After waiting for a few minutes at the Hinatuan terminal, we were able to catch a van for hire that was bound for the municipality of Barobo where we can catch a bus to Tandag. Unlike their larger counterparts in Cebu City or Puerto Princesa, Surigao del Sur’s v-hires are really small, and it could get really stuffy and crammed inside.

Less than an hour later, we boarded a bus bound for Tandag City, which makes a stop at Cagwait. Due to the wide highway and few vehicles, these buses ply their routes at breakneck speeds clocking to around 100 kilometers per hour! Unaccustomed to such high speeds, Sweetie and I squeezed each other’s hands until our knuckles hurt.

Even when we’re riding at such high speed, it took us around 2 hours to reach the town of Cagwait. The place was so peaceful and quiet that we thought it was actually abandoned.

Almost immediately after we disembarked from the bus, a young habal-habal driver approached us. We told him where we’re going, boarded his motorcycle, and off we went. Check out the town’s main street in the photo below; it’s almost empty!

Along the way, we saw a very promising project of the local government of Cagwait, a program for the rehabilitation of mangrove forests in the area. This is one of the things that we love about far-flung towns, villages, barrios, municipalities, and provinces. They are very serious and dedicated in preserving the environment and their tourist attractions. Even if they clearly lack support from the national government, they study, plan, and implement these worthwhile projects with exemplary efficiency that is virtually unheard of in big cities.

After 10 minutes, we finally reached Cagwait Beach. Lo and behold, the sandy beach is situated in a small sheltered U-shaped bay. Just like Hidden Beach in Aloguinsan, the place is still relatively pristine, quiet, and peaceful. For those who want to melt their stress without the “artificial” atmosphere that is usually felt in manicured resorts, Cagwait Beach is the place to be. The famous pilot Charles Lindberg once likened the place to Waikiki Beach in Hawaii, USA.

When we arrived there, the surf was quite strong, and the waves were large. The photo below faces the southern side of the bay.

It was the onset of the habagat (monsoon) season. Beyond the beach at the entrance of the cove, we could see the telltale silvery white lines of strong waves. No wonder Cagwait beach is also touted as a popular, affordable destination for novice surfers and skimboarders.

When we took off our sandals and walked barefoot on the beach, we understood why this humble beach is called the Boracay of Surigao del Sur. No, it’s not the vibrant nightlife; the feeling of tranquility dominates here. No, it’s not the world-class accommodations; the resorts that line along the beach are quite modest. No, it’s not about crowds of bikini-clad swimmers; the beach was almost empty.

It’s actually the texture of the sand; it’s as fine as in Boracay! Although it’s not as white, the yellow-brownish sand in Cagwait feels like fine powder. Standing on your heel causes your foot to easily sink in the sand!

The sand is so soft, relaxing, and comfortable that this furry pooch decided to dig a hole and catch up a snooze.

Massive surf brought about by the habagat season crashes on the shore. The photo below shows the northern side of the bay.

If you want, you can stay in one of the few resorts that line up the beach. Don’t expect world-class facilities; the resorts are modest at best. However, expect world-class travel experience as you commune with the sea, experience marine adventures, interact with friendly locals, sample delectable local cuisine, and celebrate local festivals such as the Kaliguan festival.

One of the most prominent buildings in Cagwait Beach is this unusual viewing deck which is adorned by a variety of things—from traditional decorations to lifesaving apparatus to watersports equipment.

These masks comprise some of the decors on the deck. Each is unique, and Sweetie even spotted a mask carving of Mickey Mouse’s face!

You could rent life vests, floaters, and other watersports equipment at reasonable prices.

Would you believe that the resort sells beautiful furniture pieces that are skillfully carved from whole tree stumps and logs? We first thought that these pieces were for guests who wish to dine here. But when the caretaker told us they were for sale, we were simply awestruck! Think about it: where can you find a beach resort that doubles as a furniture shop?

The resort even has an “antique” shop (actually, what they sell are hand-carved decorations and utensils).

We didn’t take a dip at Cagwait Beach since we were on a tight schedule. After spending half an hour in the beach, we headed back to the highway. There was a nearby sari-sari store where we refreshed ourselves with Sparkle, the adventurer’s favorite drink and lifesaver.

Cagwait Beach, your beautiful fine sand, rolling surf, and serene atmosphere are worth a second visit. We will surely come back to you!

1. For suggested itinerary, estimated budget, and things to bring, check the previous post and scroll down to the Itinerary, Budget, and Tips sections.

2. If you wish to ride the v-hire to Barobo, expect to be squeezed together with other passengers like sardines in a can. The vans are quite small, and it’s compounded by the fact that each has a conductor inside. The advantage of riding a v-hire over a bus is that you get to your destination faster.

If you value comfort over time, however, then we recommend taking the bus at the terminal in Barobo. Look for one that goes to Tandag City, and tell the conductor to drop you off at the Cagwait crossing.

3. There are several resorts and accommodations lining up Cagwait Beach. Simply choose which one satisfies your budget and preference.

4. Don’t worry about transportation. There are plenty of habal-habals around to take you to places.

5. June seems to be a great time to visit Cagwait due to its annual Kaliguan festival. Check the photo below for a sample schedule of the festival.

6. Assuming you’re planning to follow our itinerary (i.e., you want to stay in San Agustin rather than in Cagwait), to go to San Agustin from Cagwait, ride a habal-habal going back to the highway. Then hail a bus or v-hire bound for Butuan, and tell the driver or conductor to drop you off at Salvacion, San Agustin.

Upon reaching the highway, you may need to wait for quite some time before you can catch a bus or v-hire going back to San Agustin. That’s because the buses and v-hires ply the Tandag-Butuan route, which passes by Cagwait and San Agustin, are already full. If a v-hire or bus stops for you, expect to stand on the aisle.

An alternative way is to ride a habal-habal from Cagwait beach or crossing to the Aras-asan Bus Terminal. From there, you can ride a Butuan-bound v-hire or bus that passes by San Agustin.

← Enchanted River: The Magical Realm of the Ethereal Diwata
Britania Group of Islands: Experience Having Your Own Tropical Paradise →

16 comments on “Cagwait Beach: Burying Our Feet in the Fine Sand of a Pretty, Humble Shore” 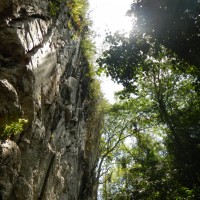