Posted by Gian and Sheila on October 25, 2019 in Cebu, Mountain Trekking 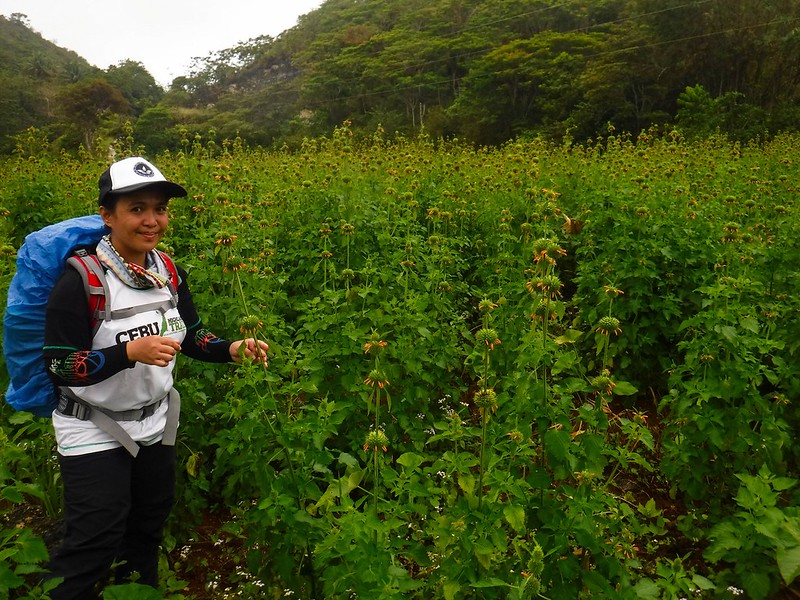 The story of fresh, local vegetables that we enjoy eating starts in the highlands of southern Cebu. Here in the misty mountains, we learn and appreciate more on the healthy food that we put on our tables. Hiking along Segment 5 of the Cebu Highlands Trail lets us discover the synergy between food, history, and culture.

We woke up to a rainy morning; the sound of a million raindrops splattering on the ceiling-less roof made it necessary for us to speak louder than necessary. By the way the sky looked, it seemed that it is going to rain for the most part of the day. To prepare ourselves for a cold, wet hike, we prepared a hot breakfast of eggs and dried fish dipped in spicy vinegar. 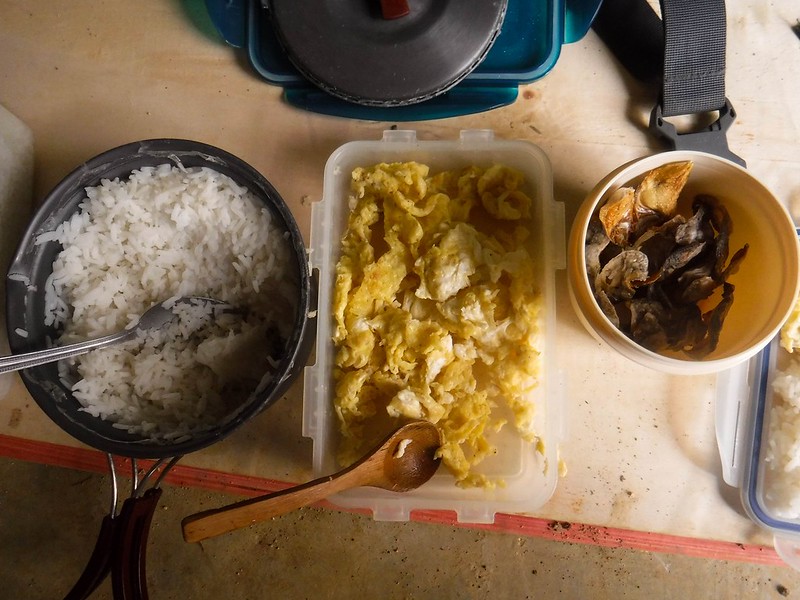 After packing up, we started our trek despite the heavy rain. But actually, we love hiking during wet weather. The low temperature and the feeling of water running down the skin makes the hike cool and pleasant. We don’t get dehydrated or exhausted. The only caveat is that we can’t get nice and vibrant photos. 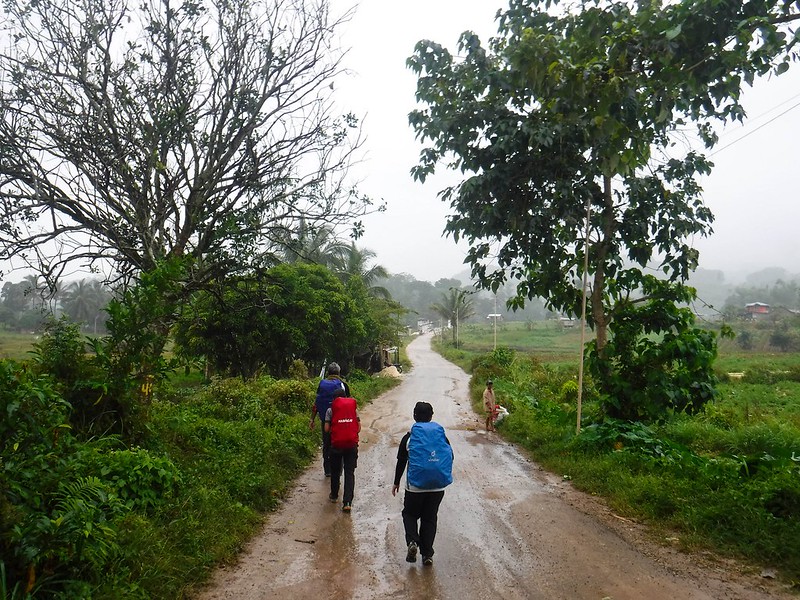 The road/trail skirted at the edge of the Nug-As Forest, one of the last few original rainforests in the Philippines. This is the home of very rare plants and endemic birds. Underneath that thick canopy is a myriad of biological wonders that make Nug-as Forest Reserve a natural treasure worth protecting.

We were a little bit concerned of the houses and farms that have started to encroach the base of the mountain. Hopefully, the locals won’t plow into the slope itself as it was one of the last original bastions of Cebu’s wildlife. 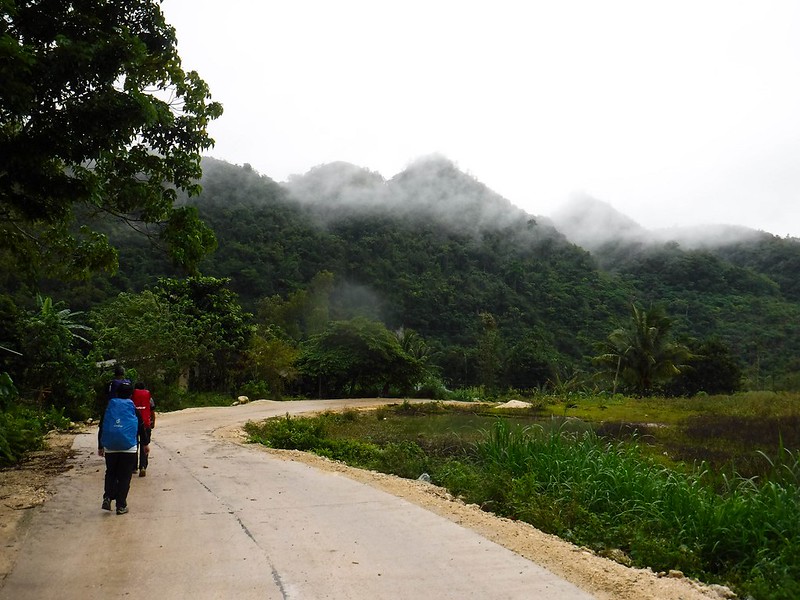 On the other side of the road are farms and rooster coops. Rich people who have a knack for high-stakes gambling breed aggressive roosters for cockfighting. The better the roosters are taken cared of, the more chances of winning. Oh, look! The roosters even have their own homes! 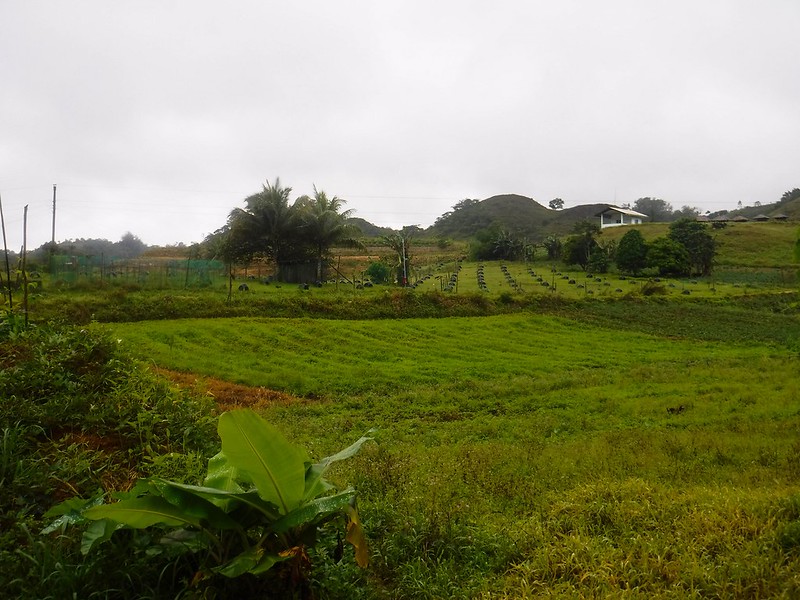 Unfortunately, there are greedy businessmen who don’t care about destroying Nature and disrupting local culture. We heard from locals that this bulldozed piece of land is supposed to be a mountain resort—-which is absolutely not needed in a place where simplicity, tranquility, and harmony with Nature reign supreme. 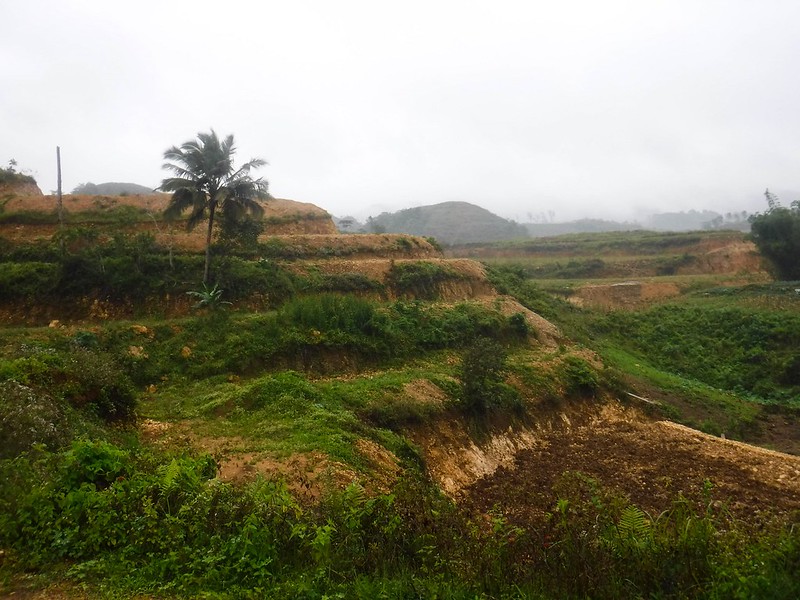 As we walked farther south, we found this large lot blanketed by these thick leafy foliage. What could it be? Is it a tunnel to another world? 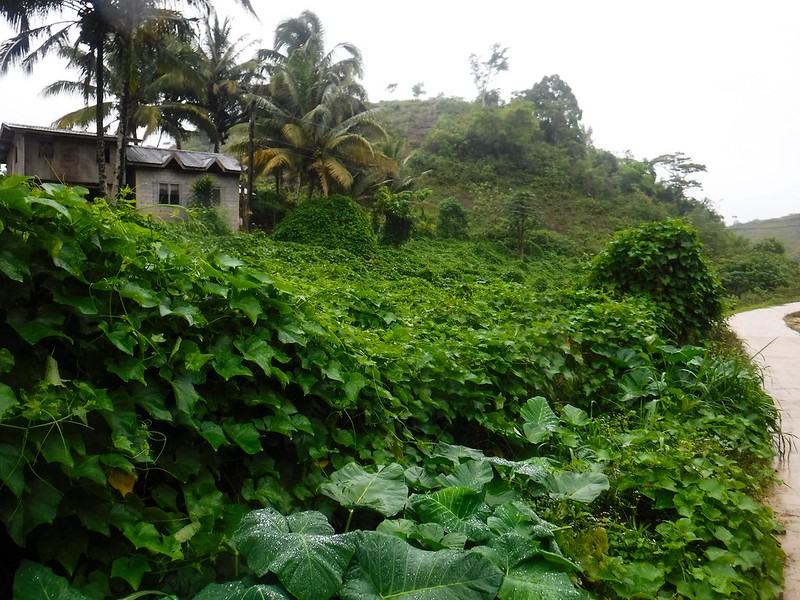 Well, not exactly. What we saw from the road was the top of a trellis overgrown with chayote (sayote in the vernacular). Chayote, sometimes called white cabbage, is a common ingredient in Cebuano soups, particularly chicken tinola, thanks to its pleasant, mild flavor. It is rich in amino acids and vitamin C. 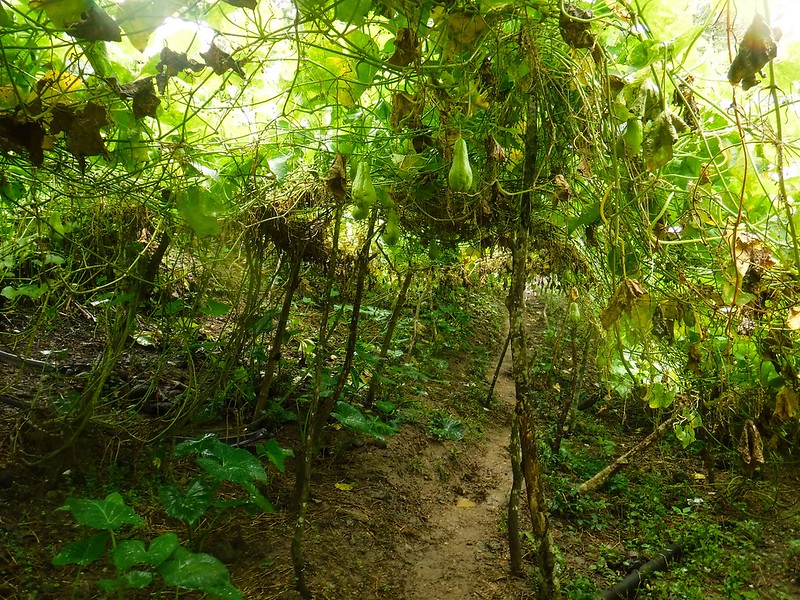 Another household has a tomato farm. New green tomatoes have sprouted from the branches of their plants. Green tomatoes can be chopped and used as ingredients in salads, soups, dips, and many other dishes. 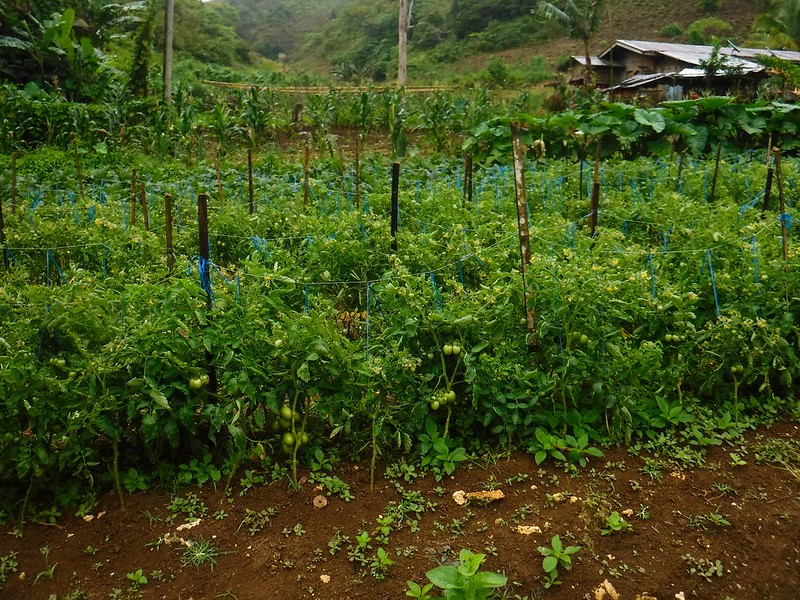 Young vegetables grow lush and green along the ideal conditions of Cebu’s highlands. From afar, a new field is tilled in preparation for planting. All these vast farms are lovingly cared of by locals whose knowledge, art, and science of vegetable farming are passed on from generation to generation. 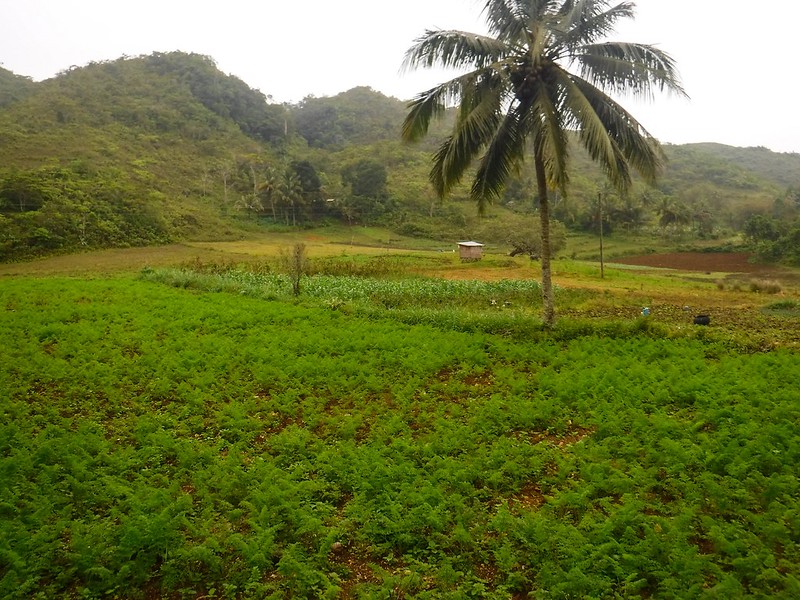 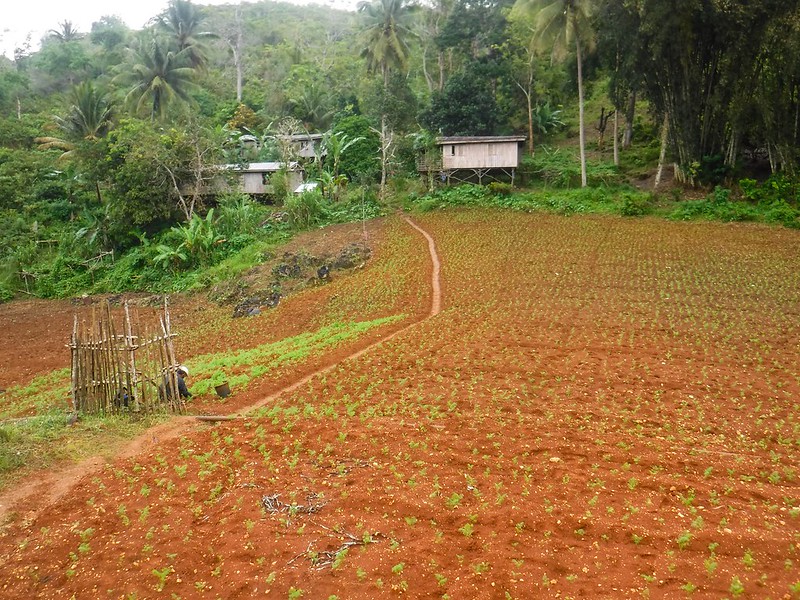 A few hours later, we stopped by a sari-sari store where we had a snack break of cassava and ice-cold softdrinks. Yes, walking on a concrete road is hard on the feet, but at least, you are sure to see stores like these. 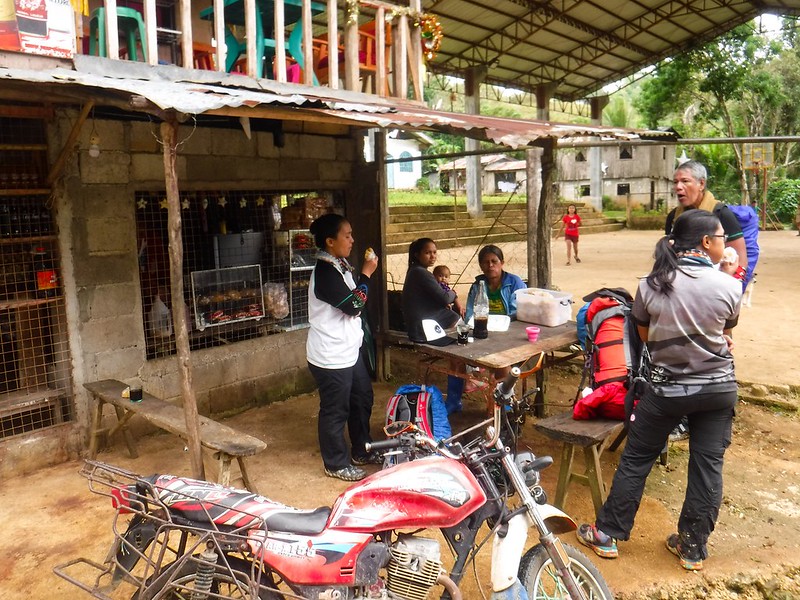 Re-energized by our snack, we continued along the way. Cows and carabaos (water buffaloes) are the farmer’s living tractors and mowers. No need for expensive fuel, spare parts, and complicated maintenance. In exchange for plowing the ground and keeping weeds trimmed, these cattle simply need some food and tender loving care. In fact, they are quite happy and contented to bask in meadows, chewing their cud. 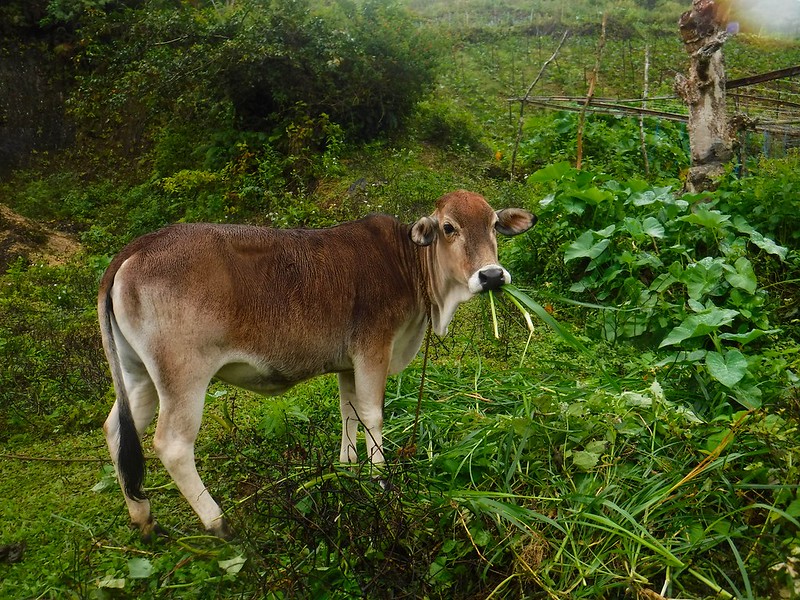 Green beans—it’s also known as string beans, or batong in the vernacular! Very common ingredient in many Filipino dishes. Green beans are rich in flavanols and nutrients. Unfortunately, for some reason, my stomach is not in good vibes with green beans. 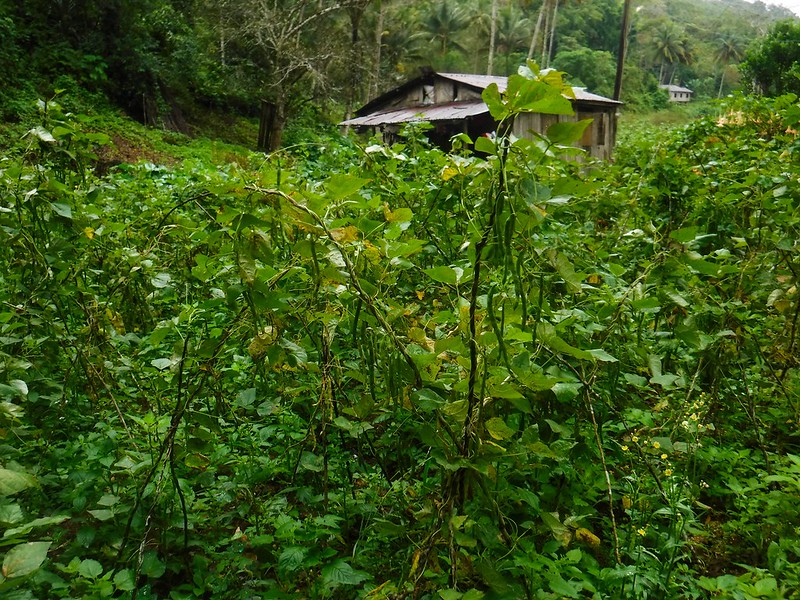 We passed by a manananggut climbing a tree to harvest fresh tuba, or coconut wine. How does he do this? Well, first he climbs up a coconut tree—without any safety gear, mind you—to look for a premature fruit stalk called a daol. He carefully straps a bamboo container called a sugong to the daol. The sugong is left there overnight to catch the dripping sap. In the morning, the manananggut will get the sugong, pour the tuba in another container, shorten the daol using a sharp tool called a sanggut, and repeat the process.

Fresh tuba is the drink of the gods, a world-class champagne. It’s sweet, naturally carbonated, and moderately alcoholic. In a fortnight, it turns into what is called bahal, which is favored by those who want a stronger, more alcoholic drink. In about three weeks, it will turn to vinegar. 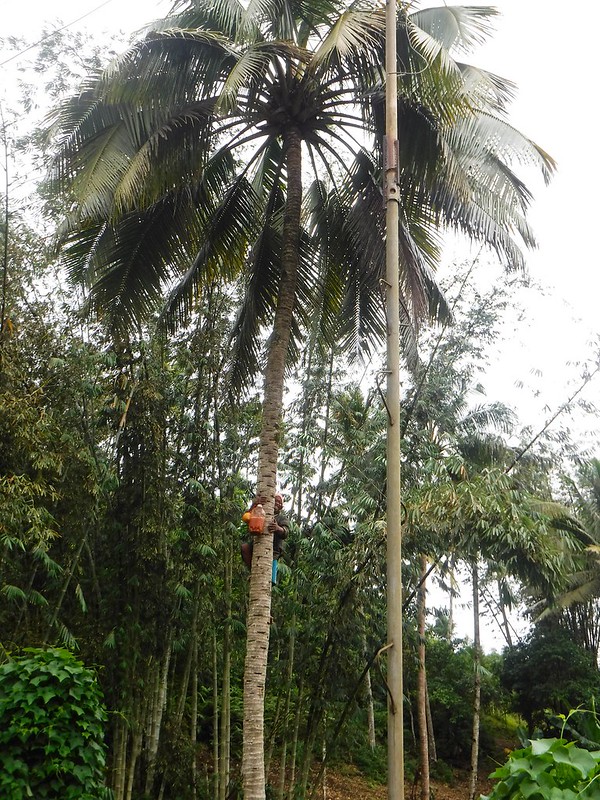 In places where the soil is not fertile enough to grow vegetables, corn is planted. Corn can grow almost anywhere. 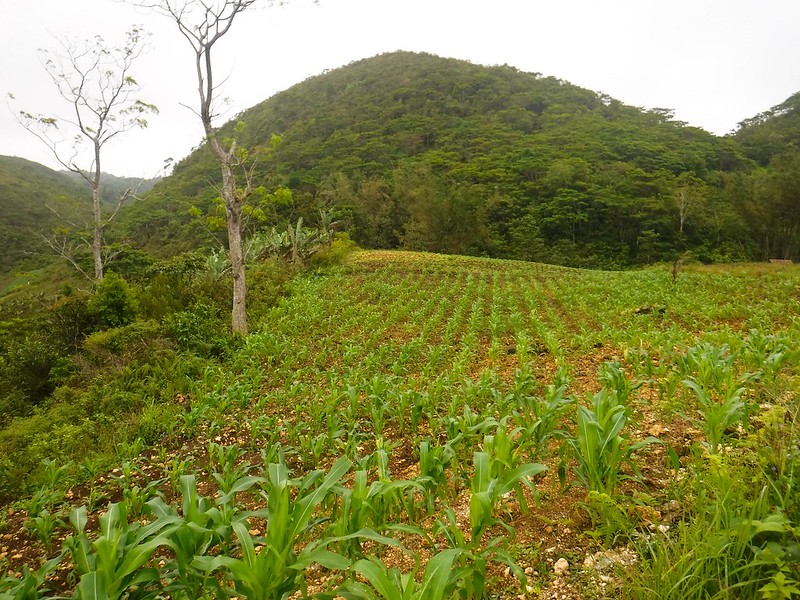 Taro, locally called gabi, are grown in huge fields! So huge are the fields that often, they cover entire hills. The corms (a swollen part of the stem that grows underground) are harvested and peeled then roasted, baked, or boiled. Gabi tastes slightly sweet and nutty thanks to its natural sugars. Packed with protein, vitamin A, and vitamin C, gabi is a common ingredient in many Cebuano dishes and is even used as baby food. 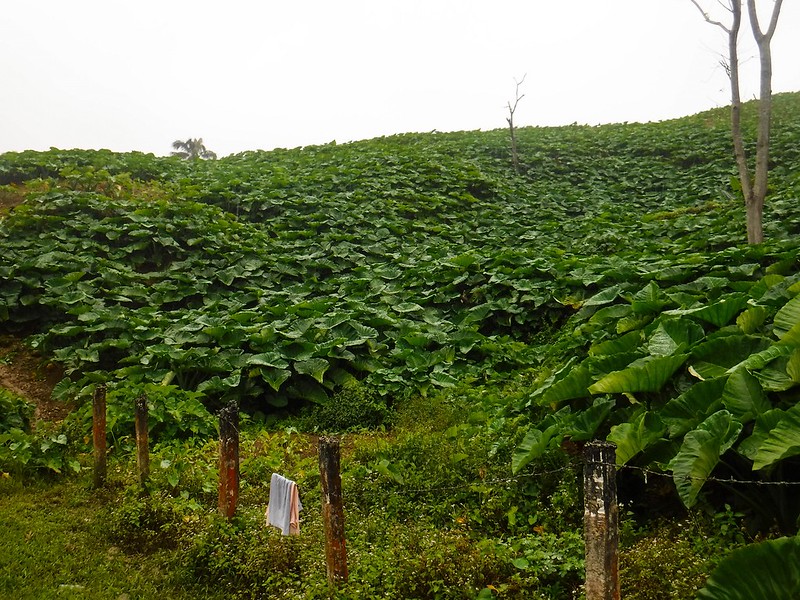 Oh, a field of flowers! We’re not sure what they are, but they look like small sunflowers! 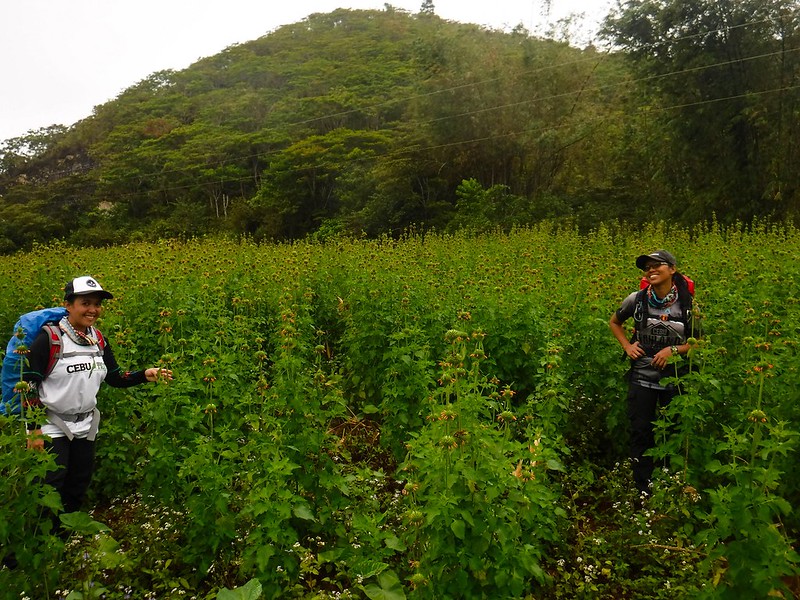 It has been quite a walk in the rain, and we were soaked to the bones. But after seeing this fenced section of the road, we were elated. It meant that we almost done with Segment 5. 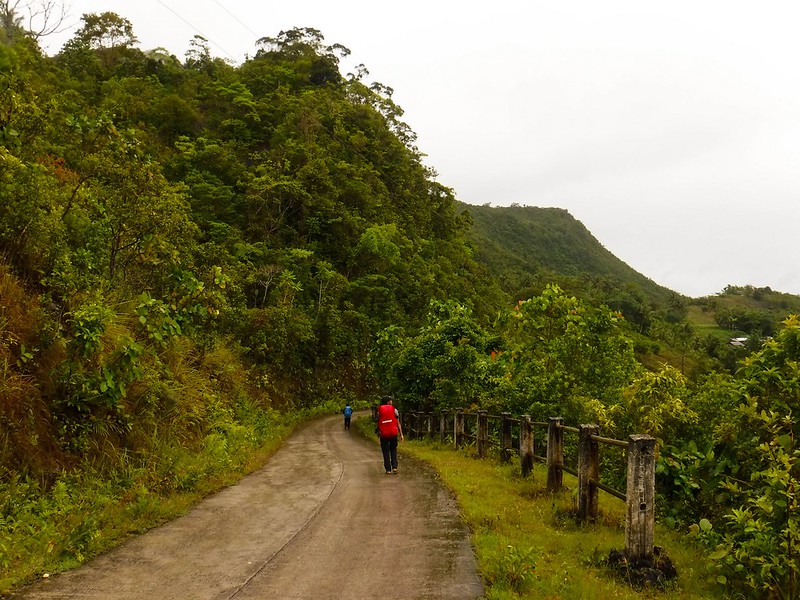 Before 12 noon, we arrived at the very end of Segment 5 at Upper Beceril, Boljoon—a full 3 hours ahead of our estimated time of arrival according to our itinerary. We were quite happy and excited, not only because we accomplished Segment 5 but also because a nice surprise was waiting for us at the end of that fork. 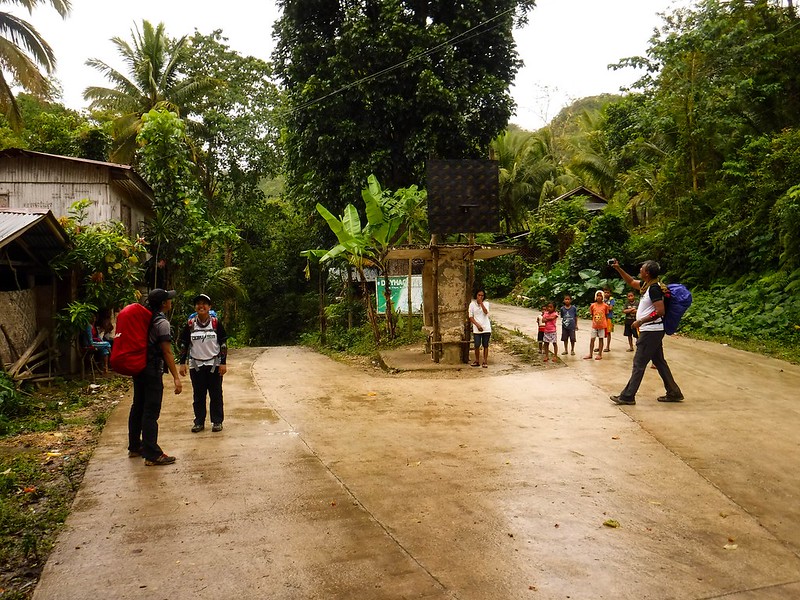